Real-time updates on blowfly risk – produced via an ongoing collaboration between Elanco and NADIS (National Animal Disease Information Service) – now show the risk level has increased to “severe” across most regions of the country. 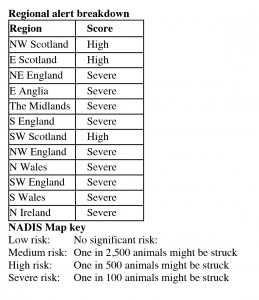 Richard Wall, Professor of Zoology (Ectoparasite Specialist) and compiler of the Blowfly Risk Alerts, said: “We are now rapidly approaching the peak of the strike season and warm wet weather is ideal for flies and maggots.

“Extreme care is needed in the next few weeks to watch out for strikes in both lambs and ewes. Body strikes also usually become increasingly common as the season progresses.”

Kate Heller, Elanco’s ruminant technical consultant, said farmers are being urged to ‘strike first’ with preventative treatments rather than risk devastation to their own flock.

“Using protection early reduces risk later in the season by ensuring a much lower fly count as the season progresses,” she said. “A lot of farmers think “it’s not in my control” because of bad weather or other circumstances.

“They’re unnecessarily putting limits on themselves. Blowfly strike is not an inevitable part of farming and can be mostly avoided with the right management strategy.”

Results of an Elanco blowfly study conducted in partnership with the National Farm Research Unit. found that 99% of farmers having suffered financial losses as a result of blowfly strike, while 82% agree that the blowfly season is getting longer, with cases of strike being reported as early as February and as late as November.

June 17, 2022
We use cookies on our website to give you the most relevant experience by remembering your preferences and repeat visits. By clicking “Accept All”, you consent to the use of ALL the cookies. However, you may visit "Cookie Settings" to provide a controlled consent.
Cookie SettingsAccept All
Manage consent