NFU president to underline importance of food to Michael Gove

NFU president Minette Batters will put British food and farming at the top of the agenda at a MP reception at the House of Commons today.

The NFU Summer Reception, which will see the Secretary of State for Food and Environment Michael Gove deliver a keynote speech, will bring together over 100 MPs and farmers to make the case for the importance of producing more quality, British food post-Brexit. 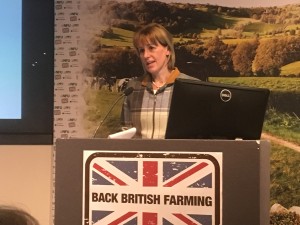 NFU president Minette Batters (pictured) said: “It is a pivotal time for British farmers; we’ve just submitted a response to the biggest consultation on the future of the farming sector in 40 years and we will soon see the Agriculture Bill. It has never been so important to underline the value of the British food and farming sector to Government.

“It is our strong belief that every person, no matter what their income, has a right to have access to quality, safe, traceable food produced to high animal welfare and environmental standards. And it’s this food that British farmers are able to deliver.”

“British farming’s offer doesn’t stop there; it stretches across 70% of the nation’s iconic countryside, caring for the natural environment and providing habitats for wildlife. Farmers really are the original friends of the earth.

“With such a good story to tell on behalf of Britain’s food and farming industry, this event will be yet another opportunity for us to get these important messages across to Government.”

September 23, 2022
We use cookies on our website to give you the most relevant experience by remembering your preferences and repeat visits. By clicking “Accept All”, you consent to the use of ALL the cookies. However, you may visit "Cookie Settings" to provide a controlled consent.
Cookie SettingsAccept All
Manage consent