Saturday 15th May 2021
You are at:Home»News»Brexit»NOAH: ‘No-deal’ Brexit is a serious concern for the animal medicines industry

The increasingly turbulent negotiations and the strong possibility of a no-deal Brexit are causing increasing levels of concern, and in some areas negativity, amidst the animal medicines industry, says NOAH’s third Brexit Barometer. 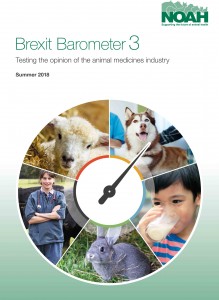 The seemingly continued lack of Government progress was revealed to be of grave concern as we move ever-closer to the March 2019 Brexit deadline.

Whilst continuing to highlight recurring themes of uncertainty and concern, the third edition of the Barometer does however reveal pockets of optimism – particularly in relation to animal health and welfare. Conversely, of the six lenses that have been examined in the Barometer, trade and export and public health and food production have seen noticeable increases in negative sentiment and uncertainty.

The changing sentiment was tracked across the same six lenses as the previous two Brexit Barometers: animal health and welfare, public health and food production, trade and investment, R&D and innovation, bringing new products to market and post-licensing controls for the overall market.

NOAH chief executive Dawn Howard said: “Increasing levels of uncertainty were a key take-out in our second Brexit Barometer report back in Winter 2017, and it is concerning to see that these are continuing to rise as we move closer to the Brexit deadline.

“We are committed to supporting our members through the difficult coming months, however, we do need more clarity from Government in order to secure the best possible outcome for the animal medicines industry. The reality of a no-deal Brexit is looming and only with Government clarity and solutions can we achieve the outcomes that we as an industry are striving for.”

The next Brexit Barometer will be launched in Winter 2019.