Sunday 17th October 2021
You are at:Home»News»NFU calls for MPs and farmers to support Back British Farming Day 2020

The National Farmers Union is inviting MPs and farmers across the UK to throw their weight behind next month’s Back British Farming Day to celebrate our farming industry.

Now in its fifth year, Back British Farming Day – on Wednesday, September 9 – will provide a focus to celebrate British farming values and highlight its importance to the UK economy.

A spokesman for the NFU said: “We will be reminding politicians that British food and farming contributes over £120 billion to the UK economy each year and employs four million people.

“This year it gives farmers an opportunity to promote British farmers commitment to high production standards, building on the success of the NFU’s food standards campaign, which has been backed by over a million people.”

This autumn will be a critical time for British food and farming as the Agriculture Bill returns to the House of Commons to be passed into law and trade negotiations continue with countries across the world.

What the NFU is asking MPs to do
All MPs are being invited to show their support for farming by wearing a wool and wheatsheaf pin badge in the Palace of Westminster on Back British Farming Day (Wednesday, September 9) and to post a photograph of the badge quoting what farming means to them, on Twitter, using #BackBritishFarming. 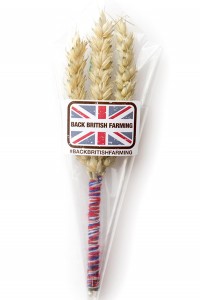 Over the coming weeks MPs may be out on farm. If they visit a farm they’re asked to take a photo and post on their social media channel using #BackBritishFarming.

The NFU will also be releasing a report to coincide with Back British Farming Day that sets out farming standards.